This Apple Rum Bread Pudding solves a problem I have had for years! What do I do with those extra hamburger and hotdog buns that I overbought?

I love a good cookout! It’s a fantastically easy way to gather people together, which is pretty much my life’s purpose right now. Unfortunately, it can be hard to determine how many hamburger and hotdog buns you need, especially if you have an open invitation to friends and neighbors.

Have you ever hosted a cookout and realized you bought waaaaaaay too many hamburger and hotdog buns?

That happens to me every single time! Usually, I put the extras in the freezer, only to throw them away about a year later when I remembered I put them there, and they are too freezer burned to use!

Seriously, does anyone actually use those buns out of the freezer?

If you do, you are a better human than me! Please teach me your ways!

I don’t like to be wasteful, but I also don’t want to eat hamburgers and hotdogs every day for weeks!

This post contains affiliate links. As an Amazon affiliate, I may earn compensation when you click on the links at no additional cost to you.

Thanks to my friend Rose, a connoisseur of bread pudding, I set out to find a combination that she would love. This one was a hit!

Bread pudding was invented by frugal cooks way back in the eleventh century as a way to use up stale bread. It is basically cut-up stale bread with custard poured over it before it is cooked. To me, that always sounded gross… until I finally tried it.

I finally found a delicious way to use all those buns this time, so they don’t go to waste. The hamburger and hotdog buns can be a few days old or fresh out of the freezer. For this recipe, it doesn’t matter. You can actually use any bread. If you want to be fancy, use challah or french bread.

The thing that sets this recipe apart is the apples. Bread pudding typically has raisins in it, which I don’t prefer. I first tried to make this without any fruit, and then I had some kids try it. One of the kids said, “Miss Carrie, I think this needs apples.”

And that was how this Apple Rum Bread Pudding came to be!

If you absolutely love raisins, you can add about half a cup to this recipe. I have heard that soaking them in rum first adds some great flavor, but I haven’t tried it… because I think raisins are gross.

Put on a cute apron and wash those hands. Then tie back your hair, so nobody gets extra love in their food. I need to remind myself of this every time!

Ingredients for the bread pudding:

Preheat your oven to 350 degrees Fahrenheit. Grease a 1 1/2 quart baking dish and set aside. If you forget to grease the dish, it’s not the end of the world; it just makes it a little bit hard to get out of the pan. I say this because I always forget this step… I’m too excited to make the delicious treat!

Cut up the leftover hamburger buns into about 3/4 inch chunks. This does not need to be exact. If the bread happens to be a little stale, that’s great!

Next, dump all the “non-bread” ingredients into a bowl and whisk it up! Set it aside for a minute.

Note… because we are using coconut oil, it may turn into little white balls as you add it to the cold ingredients. This is fine. You did nothing wrong! It still mixes up and ends up tasting delicious!

Next, chop the apples into thin bits. Put half aside to top your bread pudding later. You may want to add a little lemon to the bowl so that the apples don’t turn brown before you get a chance to eat them.

You will now get your cut-up hamburger or hotdog buns and mix in some apples. I have found the best way to do it is to get in there with your hands and mix it up!

Get your bowl of egg mixture and pour it over the top of the bread. Make sure that all of the bread has been soaked. I use my whisk to push the top bread down into the mixture until it has all been moistened.

Bake your Apple Rum Bread Pudding for about 45 minutes or until it is set in the center. The top will feel stiff when you press it, but it will be springy.

How to make the Sauce

Ingredients for the Vanilla Rum Sauce:

Dump the butter, sugars, and half & half in a 1-quart saucepan. Cook over medium heat. I use a whisk, but a wooden spoon will work as well.

Stir occasionally until it comes to a boil and begins to thicken up. Once it is at a rolling boil, I stir it more often because I am terrified that it will boil over on me and get sticky everywhere. This has never happened to me… it might be an irrational fear.

Once the sauce has thickened up, carefully add the vanilla extract and the rum extract. Mix it together and remove the pan from the heat. Pour the sauce into a mason jar or mini milk pourer.

Serve the Apple Rum Bread Pudding with the Vanilla Rum Sauce, cut-up apples, and a scoop of vanilla ice cream. (I had to get my vanilla ice cream from a carton of Neopolitan… It was quite the adventure) Whipped cream will work too, but the added ice cream made me have to take the bread pudding and sauce to the neighbor’s house so I wouldn’t eat it all myself.

Pin this recipe and share it with a friend! They will thank you for it! 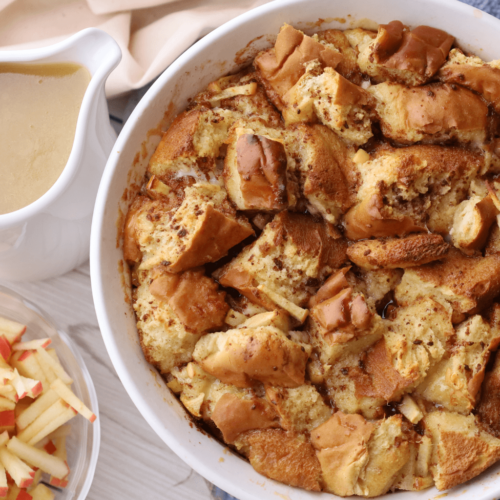 This recipe can be made with any kind of bread. Use about 4 cups once chopped up. You can use 1 tbsp spiced rum in place of rum extract. Top with sauce, apples, and vanilla ice cream or whipped cream.
Keyword apple rum bread pudding, bread pudding, leftover bread, leftover hamburger buns, leftover hotdog buns
1